On October 17th, CAAAV tenants, youth, and staff testified in the City Planning Commission’s public hearing on the proposed Two Bridges waterfront development in Chinatown. Community organizations, residents from the Lower East Side/Chinatown, supporters, and elected officials also joined this public hearing and voiced their concerns and opposition against the development of the towers. Elected officials Margaret Chin and Gale Brewer advocated for a text amendment which would lead to a Special Permit, and ultimately an ULURP (Uniform Land Use Review Procedure) process in order to include public review and opinion in the developers’ proposal. It is residents of the community that will live through the changes, such as gentrification and displacement if the towers were to get built and so it is them that should have a voice in this matter.

Developers discussed the mitigation of the concerns laid out in the Draft Environmental Impact Statement (DEIS), such as transportation concerns, overcrowded public schools, and open neighborhood space. What the developers didn’t talk about is indirect displacement of residents, specifically senior citizens in this neighborhood, the eviction rate in Chinatown, and the kinds of tactics predatory landlords currently use to harass tenants, and what the harassment will look like if luxury towers are built in a neighborhood that has a median household income of approximately $30,000.  Residents from the area feel that their concerns regarding transportation, schools, and open space have not been adequately discussed or mitigated. For example, developers reported that there would be about 16 additional school seats needed in order to avoid overcrowded public schools. The larger community was not convinced by the mitigation of this concern, and were certainly not convinced by the proposed renovations to the East Broadway F train stop and wanted to learn more about ways we can avoid transportation issues in this area if these towers were to get built. Ultimately, it was residents of the neighborhood and people with lived experiences who advocated for the preservation of this neighborhood. Approving the developers’ proposal without any public review or protections in place will yield a host of serious concerns for the residents and community living in this area.

CAAAV youth member Sophia Chok spoke this powerful testimony in front of the City Planning Commission to oppose luxury megatowers proposed for the Two Bridges waterfront. If these towers are built as currently proposed, they have the potential to bring over 2,000 units of luxury housing to just one block of the waterfront. CAAAV’s tenants, youth, and staff testified alongside Sophia at this public hearing, drawing from their lived experiences of gentrification and displacement to explain the potential impacts the proposed towers could have on the neighborhood.

As Sophia put it, “Landlords of rent-stabilized buildings will realize the market value of their estates and try to harass and forcibly evict tenants. Being an intern and interacting firsthand with past tenants who have dealt with this issue only made me more wary of these proposed buildings…I was a child 10 years ago, but I’m not anymore. I can’t sit by idly knowing that just down a few blocks, homes are being taken away from fellow Lower East Side residents.” 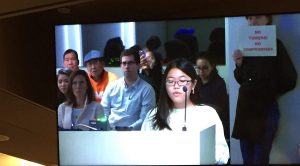 CAAAV tenants Mr. Chen and Mr. Xue who also testified about their lived experience and opposition to the development of the waterfront towers were featured here! 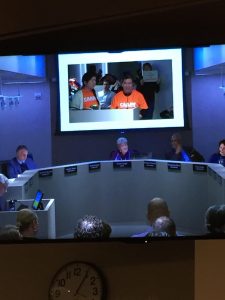 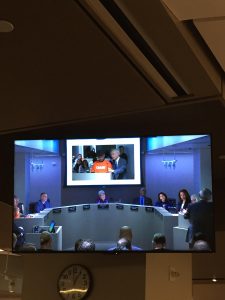